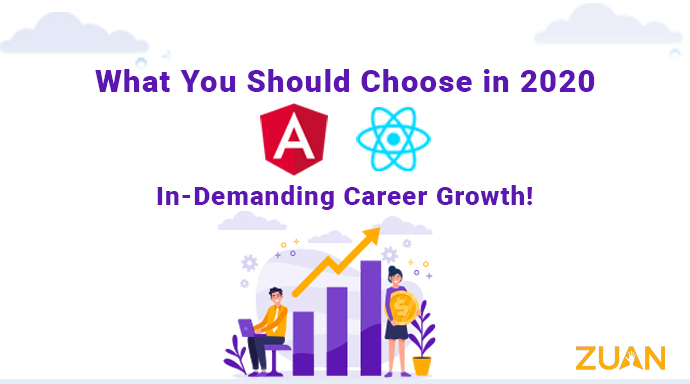 Javascript is one of the most familiar languages among web developers today. Furthermore, currently, there are a lot of developers, freshers and experienced people who love to build their own application or project using Javascript still confused to choose the right web development framework or library for their better career growth and project. So, to help them out, I came up with the key difference between Angular vs React JS-which one should they choose in the year 2020.

Moreover, between a list of available javascript web development frameworks available in the market such as Vue.js, Ember.js,  Meteor, and so on. Angular and ReactJs are listed in their topmost priority. But still, most of them are unable to decide which one would be good for their project. Freshers want to know which one is easy to learn and which one has more demand in the market for job purposes.

AngularJS was first developed by Google and was initially released in 2010. However, until 2016 it used to be called AngularJS.

Meanwhile, in 2016 Angular team released AngularJS 2 which was a complete rewrite of AngularJS. Furthermore, it was actually a completely new framework.

Hence, to reduce confusion from the previous one, the angular team decided to drop JS from the original name and they called this new framework Angular.

For example: In simple words, tell us take Angular has an entire kitchen that gives you all the tools that are required for you to build the meal that is your web app. Hence, Angular is a good choice for organizations with large teams and developers who already use TypeScript.

Related: Key Benefits Of AngularJS You Should Know

React is first developed and maintained by Facebook. It was released in 2013.

However, we need to keep in mind ReactJS is a library that is used to build interactive user-interfaces, on the other hand, Angular is a complete framework.

For example: To put in simple words, tell us take React is the oven. You mostly need more tools to bake that cake in the oven, hence it allows you the flexibility to pick and choose what tools you want based on your needs to bake the cake. Therefore, React is a good choice for someone getting started with front-end JavaScript frameworks, startups, and developers who like some flexibility.

Let’s see what the StackOverflowsurvey says about Angular and React.

From the above two images, it’s clearly mentioned that ReactJS has a higher priority than Angular and Google Trends also says ReactJS is the most popular library. Now we will compare both of them based on certain factors to decide which one would be better to choose for the project as well or better career growth for beginners.

Know Every Difference Between React JS vs Angular- A Very Strong Comparison to Choose the Right one:

If we try to search for the jobs on StackOverflow and Upwork for Angular and React we find below results.

From the above two results, it’s clear that React developers are more available than Angular and its demand is high.

Related: The Essential AngularJS Interview Questions and Answers You Need to Prepare

When to Choose React for a Project?

React Native framework is the right choice for your app project when:-

When to Choose Angular for a Project?

Choosing Angular framework is a good choice for your app when:-

I hope this will give an idea for the experienced person to choose whether angular or React JS as per the current scenario.

What does the Future Hold for React and Angular for Freshers’ career Growth?

The exact one-line answer to this question is that none of the two frameworks will go out of the picture by the next year or even by 2025. While React has more searches and popularity, whereas Angular is highly considered by developers due to the availability of ready-made solutions – implying both are popular in the market.

Furthermore, if you’re a beginner, want to learn React or AngularJS, There are many private IT institutions in Chennai that make the learning process much simpler through their experienced professional trainers.

In a meanwhile, read Why to Choose AngularJS Developer as Your Career for in-demand Career in Front-End Development!