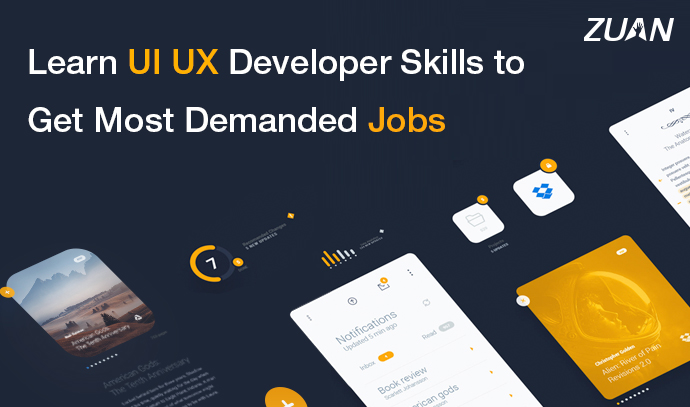 Do you like to create fancy websites? I mean those that are color-filled and interactive!!! Why not use some UI UX developer skills that will make you an awesome designer?

You know, I love to look at colorful websites and screens that actually behave in a way that I like. Screens that like pop up on your face, talk to you and easy to use.

If you are a web designer, I would first suggest that you follow some leading UI UX designers who are on Twitter. You can get personal inspiration from them.

Luke is a former designer at Yahoo. And now has his own startup called “Input Factory” where he works on developing micro mobile interactions.

Andy is a UX leader at UX design agency called “Clearleft”. He has immensely contributed to the “Web Standards” movement.

Jared has 15 years experience in user interface engineering. You can follow him on Twitter to participate in debates and see useful sharings on his feed.

Aarron is the author of Designing for Emotion where he talks about how to attract users to your website. You can follow him on Twitter to gain knowledge on how to come up with good UX designing.

Paul is a famous UX strategist with 20 years of experience in the field. He is the co-founder of web designing agency called Headscape.

Wilson is the person who helped create the first version of the Django web framework. He has also worked for Facebook, Apple, Everyblock, and Rdio.

Nick is a user experience professional who has been in the industry for more than 10 years. He helps to create both web and mobile experience for Google, Adobe, Intel, and Oprah.com.

Chris is the inventor of the famous Hashtag # on Twitter. And he is also a product designer. He is also the user experience designer behind Google+ and the co-founder of Barcamp.

Just follow these intelligent designers. And you will keep getting a lot of new ideas to add on to your UI UX designing skills.

Now let us come to the crux of the matter.

What UI UX Developer Skills do Hiring Companies Look For In Me?

As I have pointed out above, I expect certain design aspects from any screen I see on the web page. Qualities like “interaction design”, “good user experience design”, “attractive graphic design”, “responsive design”, etc..

All the above aspects in designing create a good customer experience for anyone visiting a web page.

If you want to be hired as a UI UX developer, work on the below-listed design skills and related roles.

To succeed as a full-time UI UX developer you need to know languages such as HTML, CSS, and JavaScript.

You should learn modern application programming languages such as Java, .Net, AJAX, PHP, XHTML, and Ruby. These are vital among UI UX developer skills.

Having knowledge of Adobe creative suite programs is important among UI UX developer skills. Here, you should know to use Photoshop, Illustrator, Flash, and Flex to mockup UI elements.

This testing is needed to identify and fix UI issues, and gather real-world intelligence from target users.

You should collaborate with business and IT decision-makers to discuss user interface requirements and brainstorm UI ideas.

You should know to use visual aids such as wireframes, storyboards, and UI flowcharts, to plan and present user interface designs.

Be Familiar with Popular CMS

Your knowledge regarding popular content management systems (CMS) is vital. Knowledge of WordPress, Joomla, Magento, etc. are among the prominent requirements among the web developer skills.

You should have a thorough knowledge of Search Engine Optimization (SEO) to develop search-friendly websites and interfaces.

Having soft skills is important. Communication skills/written communication, team leadership, and project management are essential among UI UX developer skills. Soft skills help you to communicate better with your authorities and subordinates.

More Specific UX Developer Skills that Get You Hired

UX design is all about interactions. Therefore, rather than relying on traditional visuals you need something substantial (a prototype) that can be better communicated and evaluated.

As a UI UX designer, you should know to organize information in an understandable manner. Applicable to websites, mobile apps, etc., information structure may include systems like labeling, navigation and search functions.

Good knowledge of visual communication in the design process includes the understanding of concepts like,

Ability to Do Wireframing

Wireframing is an important skill for any UX designer. This skill enables you to create the information hierarchy of your web design.

You think that it was a long and winding list. Just to learn about good visual design or a website or web page! But you know, in practice it is actually really simple and exciting.

The above UI UX developer skills, when put into sincere practice, will take you to unthinkable career heights. Best of Wishes!