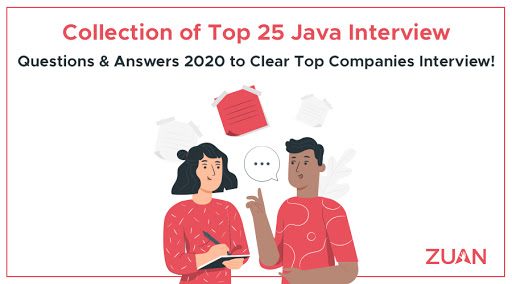 Furthermore, today JAVA is used everywhere, starting from trending technologies like Big Data to household devices like Mobiles and DTH boxes. Hence, Million of developers worldwide started using java to develop robust applications. Therefore, this is the main reason today I am going to discuss the Java interview questions.

Moreover, in today’s information technology world, Java certification is considered as one of the most in-demand certifications. Therefore, doing Java Certification will help you to upgrade your resume strength to get a job in hand that others lack.

Without further delay, let’s jumpstart into the top Java interview questions and answers that most frequently asked by top employers in the interview.

1. What are constructors in Java?

In Java, constructor points to a block of code that is used to initialize an object. It must have a similar name to that of the class. Also, it is automatic and has no return type when an object is created.

Furthermore, there are two types of constructors:

2. What is Hibernate Framework?

Object-relational mapping or ORM is the programming technique that is used to map application domain model objects to that of the relational database tables.

Hibernate is a Java-based ORM tool that gives a framework for mapping relational database tables to the application domain objects and vice versa.

On the other hand, the Hibernate framework gives the opportunity to map plain old java objects to traditional database tables with the use of JPA annotations as well as XML based configuration.

Similarly, hibernate configurations are flexible and can be done from the XML configuration file as well as programmatically.

All Java codes that are set in a Class. It has both variables and methods.

Variables are attributes that define the state of a class.

Methods are the place where the specific business logic has to be made. It contains a set of statements to meet a particular condition.

4.  What is inheritance in Java?

Inheritance in Java is the concept where the properties of one class can be inherited by the other.

Furthermore, it helps to reuse the code and establish a relationship between different classes. Inheritance is performed between two types of classes:

6. What are the various types of garbage collectors in Java?

Garbage collection in Java is a program that is used in implicit memory management. Since in Java, using the new keyword you can easily create objects dynamically, which is then created will consume some memory. Once the job is completed and there are no more references left to the object, Java using garbage collection destroys the object and relieves the memory occupied by it. Java provides four types of garbage collectors:

7. What is the purpose of a transient variable?

8. What is the difference between a local variable and an instance variable?

In Java, a local variable is generally used inside a method, constructor, or a block and has only local scope. This variable is most widely used only within the scope of a block. The best advantage of having a local variable is that other methods in the class won’t be even aware of that variable.

On the other hand, an instance variable in Java is a variable that is bounded to its object itself. These variables are declared within a class, but outside a method.

9. What is mean by Collections in Java?

Collections are used to perform the following operations:

A group of objects is known as collections. All the classes and interfaces for collecting are available in Java util package.

10. What are all the Classes and Interfaces that are available in the collections?

Given below are the Classes and Interfaces that are available in Collections:

Polymorphism is referred to as “one interface, many implementations”. Polymorphism is a feature of being able to set a different meaning or usage to something in different contexts – specifically, to allow an entity such as a variable, a function, or an object to have more than one form. There are two types of polymorphism:

12. How can you handle Java exceptions?

There are five keywords used to handle exceptions in Java:

13.  Why Java is platform-independent?

Java is called platform independent because of its byte codes which can run on any system irrespective of its underlying operating system.

Java is not 100% Object-oriented because it makes use of eight primitive data types such as boolean, byte, char, int, float, double, long, short which are not objects.

15. What are wrapper classes in Java?

Related: How to Start Learning Java from Scratch for Beginners

16. Why pointers are not used in Java?

Java doesn’t use pointers because they are unsafe and increases the complexity of the program. Since, Java is known for its simplicity of code, adding the concept of pointers will be contradicting. Moreover, since JVM is responsible for implicit memory allocation, thus in order to avoid direct access to memory by the user,  pointers are discouraged in Java.

JIT stands for Just-In-Time compiler in Java. It is a program that helps in converting the Java bytecode into instructions that are sent directly to the processor. By default, the JIT compiler is enabled in Java and is activated whenever a Java method is invoked. The JIT compiler then compiles the bytecode of the invoked method into native machine code, compiling it “just in time” to execute. Once the method has been compiled, the JVM summons the compiled code of that method directly rather than interpreting it. This is why it is often responsible for the performance optimization of Java applications at the run time.

In Java, access modifiers are special keywords that are used to restrict the access of a class, constructor, data member, and method in another class. Java supports four types of access modifiers:

A class in Java is a blueprint that includes all your data.  A class contains fields (variables) and methods to describe the behavior of an object.

20. What is an object in Java and how is it created?

An object is a real-world entity that has a state and behavior. An object has three characteristics:

An object is created using the ‘new’ keyword.

21. What is Object Oriented Programming?

Object-oriented programming or popularly known as OOPs is a programming model or approach where the programs are organized around objects rather than logic and functions. In other words, OOP mainly focuses on the objects that are required to be manipulated instead of logic. This approach is ideal for the program’s large and complex codes and needs to be actively updated or maintained.

22. What are the main concepts of OOPs in Java?

Object-Oriented Programming or OOPs is a programming style that is associated with concepts like:

23. What do you mean by an interface in Java?

An interface in Java is a blueprint of a class or you can say it is a collection of abstract methods and static constants. In an interface, each method is public and abstract but it does not contain any constructor. Thus, interface basically is a group of related methods with empty bodies. Example:

24. What is the difference between Error and Exception?

An error is an irrecoverable condition occurring at runtime. Such as OutOfMemory error. These JVM errors you cannot repair them at runtime. Though error can be caught in the catch block the execution of application will come to a halt and is not recoverable.

While exceptions are conditions that occur because of bad input or human error etc. e.g. FileNotFoundException will be thrown if the specified file does not exist. Or a NullPointerException will take place if you try using a null reference. In most of the cases it is possible to recover from an exception (probably by giving the user feedback for entering proper values etc.

25. What is an abstraction in Java?

Abstraction refers to the quality of dealing with ideas rather than events. It basically deals with hiding the details and showing the essential things to the user. Thus you can say that abstraction in Java is the process of hiding the implementation details from the user and revealing only the functionality to them. Abstraction can be achieved in two ways:

Abstract Classes (0-100% of abstraction can be achieved)

Interfaces (100% of abstraction can be achieved)

In case you are facing any difficulties with these java interview questions, please comment on your problems in the section below. Apart from this Java Interview Questions Blog, if you want to get trained from experts on this technology, you can opt for structured training from Zuan Education!

Check out the Java Training by Zuan Education, a trusted It professional training institute in Chennai. We are here to help you with every step on your career journey. Besides these java interview questions, we come up with a comprehensive curriculum that is designed for students as well as professionals who want to become a great Java Developer.

The course is designed in a way that gives you a head start into Java programming and train you for both core and advanced Java concepts along with various Java frameworks like Hibernate & Spring.

Good luck with your interview!