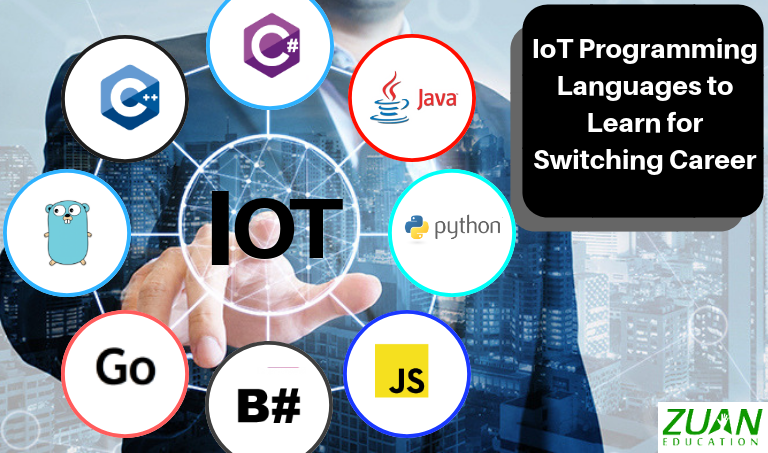 Stop a minute and check the IoT programming languages if you plan for a career switch. Why? Because internet is every where. And you can make use of this pervading power.

But let us make clear what IoT is. Have you had the feel of the old mobile phones? Ones with which you can only make calls and send messages. I had one of that kind way back in 2004.

Will Learning IoT Programming Languages Fetch you a Guaranteed Job?

Furthermore, a research conducted, titled, “Top Strategic IoT Trends and Technologies through 2023” highlights 10 upcoming trends in IoT. They are,

Significantly, the possible areas of career opportunity in IoT after learning IoT programming languages are in,

Learn IoT programming languages to get any of the following jobs,

Furthermore, other job roles that you can get in the field of IoT are,

What IoT Programming Languages should you Learn to Jump into an IoT Career?

First of all it is necessary to understand that the IoT architectural environment is divided into four sections as:

Importantly, a basic sensor generally uses C as the programming language. Because C can work directly with the ram.

Furthermore, it is important for developers and programmers to choose the language apt for them to work in IoT.

Assembler is needed to make your IoT project compact, minimal and optimal. Moreover, as an assembler expert you can work out many optimization tricks.

Importantly, assembler packages and assembles pure machine code efficiently to be executed by the processor.

Specifically, B# was developed for small applications. Therefore it can be used on multiple platforms using an Embedded Virtual Machine (EVM) that supports B#.

Significantly, B# adds support to critical real-time control functions. In particular, if your project is small enough and not complex as Raspberry Pi, then B# is your language.

You can use C with IoT boards like Adruino. Furthermore, C is the language for embedded systems programming. Significantly, its proximity to machine language makes it really fast.

C doesn’t have the processing power of an object oriented pre-processor like C++. Therefore it is used as a pre-processor for C to enable it to run higher level languages.

Likewise, if you want to go beyond C and use programming code for IoT and embedded code, C++ helps you go.

“Go” is used for data gathering and data distribution to various sensors. Moreover, with Go Lang, you can sort an entire network of sensors and make use of related IoT programming related devices.

Additionally, Go is for concurrent input, output, and processing on several different channels.

If you want a good return on investment then Java is best for you. As an IoT app maker, you should see to that your platform supports Java.

Additionally, you should check if hardware support libraries in use contain required control functions.

A good scripting language needed for front-end web application which works wonders for IoT. This is even truer when you go with Apache server on Raspberry Pi.

Moreover, it involves collecting data from a network of sensors.

Do you need parallel processing for your IoT application? Then Parasil is the best.

Furthermore, Parasil is an evolved language, compiled and object-oriented. Importantly, it can be programmed with C, Syntax, Java or Python.

You can use Python for an IoT app that requires readability and compact code.

Moreover, its flexibility allows distribution of compact executable code. Similarly, it can be run through any time compiler for this purpose.

Rust is developed by Mozilla. Importantly, it is now popular among IoT programming languages, especially for concurrent programming.

The Internet of Things is slowly impacting our daily life. We are under the influence of a lot of IoT devices.

For example, you have automated transport systems, smart homes, smart cities, wearables and several computational power apps that use IoT.