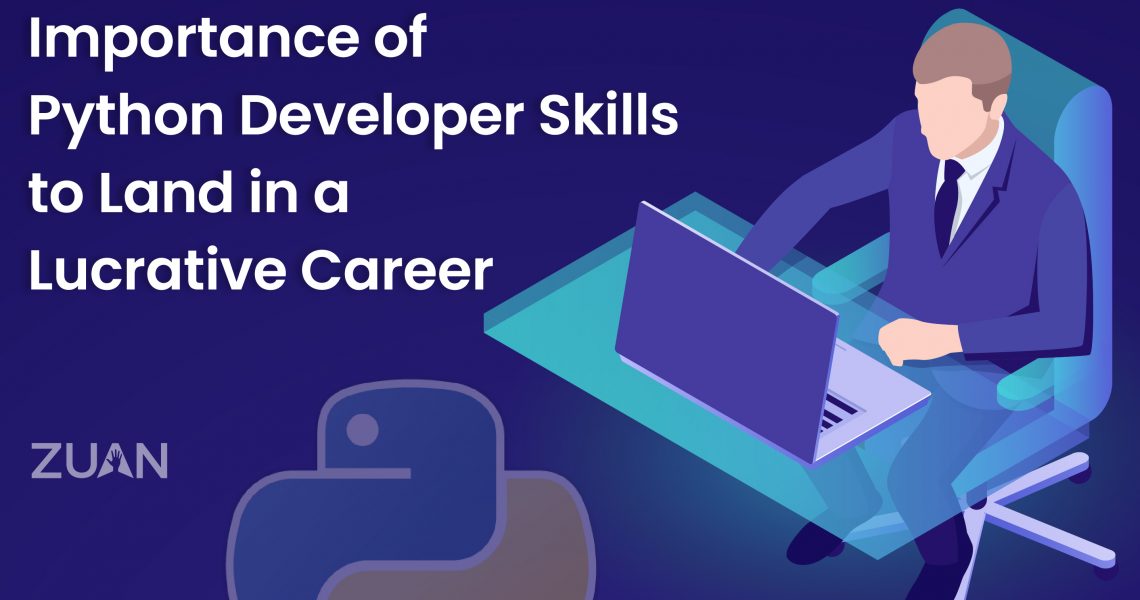 Want to become a great and notable Python developer in 2020? Then grab these 8 important python developer skills for 2020 which helps you to build many famous dynamic websites and make you skyrocket in the IT field.

But you must know one thing, with the rising popularity and boon of Python made it has one of the most sought-after and widely used programming languages in the industry.

So, to land in a Lucrative career, Python programming language became one of the most important web development skills that pay you high in 2020 and beyond.

How does Python Developer Skills help you in landing in a lucrative career?

Learning Python today has gone mainstream for many.  If you have not yet noticed, there are hundreds of today’s most successful tech companies which widely using Python, including Google, Instagram, Netflix, Reddit, Lyft, and Spotify.

In addition, it’s also being used at the New York Times, Bloomberg, and sometimes even at your local bank.

To be pointed, having python developer skills,  some of the potential jobs, you may seem obvious — like becoming a Python developer —  other careers where knowing Python is an asset are more unexpected.

To make you much more clear about why to learn the Python programming language and how it is helpful in 2020.

Here are some top five great career opportunities that you get after learning python programming languages.

You are also most welcome to become a product manager if you know python.

As a product manager, you are responsible for researching many new user features, make an argument for why certain products should be built and also find gaps in the market.

At that point in time, Data plays a huge role in your work, so many companies give priority to an individual who knows python.

As Python is regarded as one of the top programming languages when applied to machine learning.

So without a doubt, many companies are looking for someone who can analyze larger sets of data — and a popular way to make it into action is using Python libraries such as SciPy and Pandas.

Thus,  it’s not a surprise to know that organizations like Bloomberg and Memorial Sloan Kettering Cancer Center are looking for Data Analysts, who have Python experience on their resume.

Thus, if you are well-versed in Python. There are universities and coding Bootcamp, as well as online coding tutoring platforms like CodeMentor, which are in need of people who can teach Python!

In Journalism, there is a specialty called Data journalist, who uses only data to convey stories.

So, being a data Journalist who knows Python is in great demand in 2019. This is because of their ability to rapidly sort through information.

Additionally, there are also other python job profiles including Software Engineer, Research Analyst, Software Developer, Data Scientist, and many other global careers.

From the above-mentioned career opportunities. You would have understood, Python tops for the most promising career options for techies.

Being a high-level programming language, the career opportunities for Python are growing in number rapidly. This is because Python ensures faster code readability and brevity, which means better designs with fewer code lines.

To be simple, Python is acting as a  great tool for creating dynamic scripts on both small and large scales.

Thus being a Python developer, mostly you will be dealing with back end components, apps connection with third-party web services and giving support to front end developers in web applications.

Of course, you might also create applications with the use of different languages but pretty often, you will use Python as the primary language.

Now Let’s talk about the Essential technical and Soft Skills that much you must possess as a Python Developer in 2020 and beyond to land in a profitable career.

Python is the main language and stepping stone for becoming a Python developer, which you are going to use at work to finish the project.

Python is considered as a general-purpose programming language with constantly increasing demand for. This is because Python is a relatively easy learning path, it is beginner-friendly and definitely experienced-developer-friendly as well.

Thus to become an expertise in core Python, one must have a good hold on the core python concepts which includes the following aspects:

Knowing Python framework is a must for all the Python Developer. But, it is not just to know them all. This is because, depending on the project, you are supposed to use one or the other.

Thus, as a professional Python web developer, you must have a good grasp of some popular web frameworks like Django, Flask, Bottle, Tornado, web2py.

The most widely used web frameworks include Flask and  Django, which is a high-level Python Web Framework that encourages a clean, good and pragmatic design. whereas, Flask is a  Python micro web framework. Additionally, having a Sound knowledge of Front-end technologies like HTML, CSS, and JavaScript is expected as an added advantage. This is because very often a Python developer has to cooperate with the front end team to make a match on the server-side with the client-side.

Thus, using and connecting applications through an ORM (Object Relational Mapper) like SQLAlchemy, Django ORM and so on is much faster, easier and more efficient than writing SQL – which means, the more likely it is preferred by the team and it is good to have it as a skill set.

Data Science is an ocean of opportunities, so when you deep dive into that, you will come to know some certain preconditions. This is starting from your high-school mathematics consisting of Probability, Statistics, etc.

Like other most common aspects of the same are.

These two fields are the constantly growing field in  Data Science. So when we talk about AI and Machine learning skills, it is expected that you must know all the aspects of Data Science.

That is starting from the beginner’s point of view, and also you must be well aware of Machine Learning algorithms.

It is the ability to write correctly and manage threads and processes. As these are the essential keys to develop high-performing applications.

Thus, being a great Python-Dev you must definitely know about the MVC (Model View Controller) and MVT (Model View Template) Architecture.

As a python developer, it is important to implement servers that are scalable, secure, and highly available. For this, you must possess good design skills.

One of the most important skills of every profession largely depends on having really good soft skills in the workplace.

Thus, even being in a purely programming role, you are supposed to communicate with teammates, thus collaborating to resolve issues. So you must have good communication skills.

First of all, having all the above Python skillset is your weapon to land in a better project, better position, and obviously in a better salary. It is reported that the average salary of a Python developer is INR 501,987 per year.

I hope the article on “Important Python Developer Skills to land in a lucrative career” was relevant for you. To get in-depth knowledge of Python, you can also get trained from a well-known training Institute, which provides a certificate in Python, which will help you in adding credit to your resume. Best wishes!