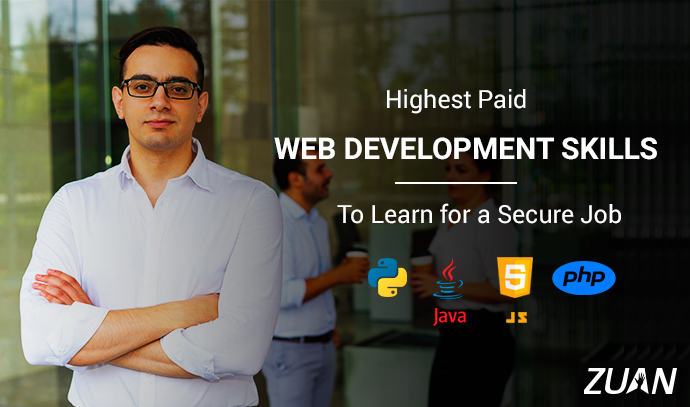 Probably, your goal is to become one of the most notable web developers and also earn more. Then you should know about the highest paid web development skills.

Web development is the building of a website. Website building is done mainly through programming languages and coding.

As mentioned above, there are some web developing skills that pay you more that you should master in 2019 and beyond. What are they?

At the same time learning these programming languages will fetch you tech jobs with the highest salaries.

You will come across one or more of these web development programming languages while you also do a degree in computer science.

Java is an open source and platform-independent programming language and among the highest paid web development skills.

Java is also the basis for the Android operating system and the most common language for developing Android apps.

About 90 percent of Fortune 500 companies use Java for building applications and back end systems. Learning Java skills will help you earn an average salary of INR 501,191 per year.

Some of the advantages of JavaScript are its swiftness, simplicity, interoperability, rich interfaces, versatility, and extended functionalities. By learning Javascript you can earn an average salary of INR 5,34,570 per year.

Expanded as hypertext preprocessor, PHP acts as broad support for various databases and its efficient integration of internet protocol. PHP is currently on its 7th version.

With PHP you can speed up tailored app development and simplify maintenance. There is no need to write added code. You can automate customary development activities and reduce overall costs. Learning PHP skills will help you gain one of the highest paid web development skills.

Python programming language is one among the web development skills that pay you high.

Learning Python skills will fetch you an average salary of INR 5,08,823. Most popular web services like YouTube and other Google projects are partially based on Python.

The video game industry is largely based on this programming language. Many scientific projects also use Python. Likewise, Python is also used in several project management.

The average salary of a Python developer is INR 501,987 per year.

C / C++ is like the bread and butter of programming. Almost all low-level systems such as operating systems, file systems, etc., are written in C/C++. If you wish to be a system-level programmer, C/C++ is the language that you should learn.

C++ is also widely used by competitive programmers because it is extremely fast and stable. At the outset, it is prominent among development languages. Learning C++ skills will fetch you a salary of INR 445,342 per year.

This programming language is also popular among the highest paid web development skills. Programmers who use Perl benefit from a high level of freedom and efficient problem-solving.

This programming language offers several ways for programmers to achieve their tasks and working in a context-sensitive manner. Pearl played a key role in the spread of the world wide web and continues to play a huge role today as a web programming language.

Apart from gaining skills in the above programming languages you also need to have knowledge of stack overflow, communication skills, etc..

Developing core skills like Python, WordPress development, project management, UX design, Flexbox & Gird layouts, testing, soft skills, Node.js., SQL, Objective – C and having years of experience will help you gain a yearly salary that is higher than average of even seven lakhs and above.