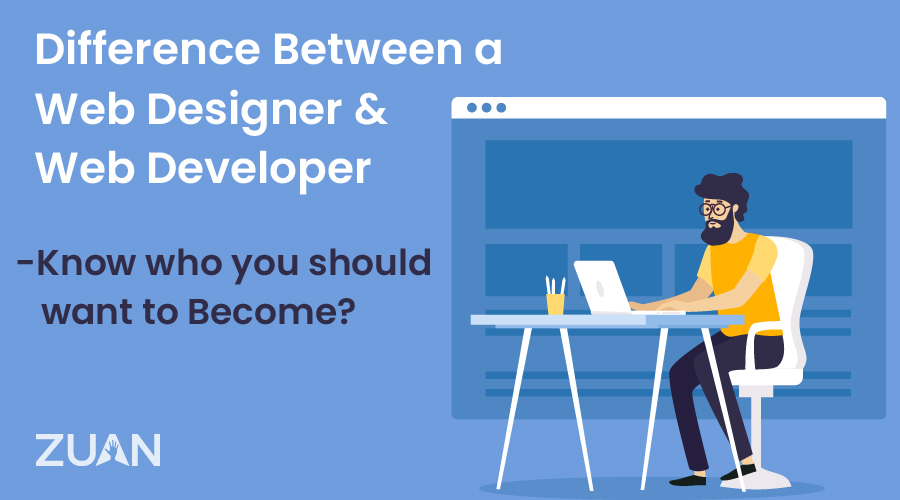 Web designers and Web developers always have a vast scope with the booming IT industry, not in India but also abroad to get high paying jobs. But Confused about the difference between a Web designer and Web developer– Who you should want to become in 2020?

If you have a lot of questions running in your mind including:

Then you’ve landed on the right page. This article would be a prelude for you to choose the right job. Besides, it also acts as a prerequisite for Businesspersons to look for someone to design and develop your company’s website. Here we go,

1. What is Web Designing and Development?

To put in simple words, Web design refers to the design of websites or website designs that are displayed on the internet, whereas Web development is the work or task associated with developing a web site for the Internet or an intranet.

Who is a web designer? In a nutshell, Web designers are responsible for creating visual or aesthetic to a website where they use various design programs such as Adobe Photoshop, illustrator to create the layout and other visual elements of the website.

Who is a web developer? Web developers on the other hand who bring life to the design files. For this, they use programming languages like HTML, CSS, Javascript, PHP and so on to turn the nice image into a page that really shows to the visitors.

2. What does a Web designer do- a Closer Look:

Web designing the name itself says designing a particular web. This actually involves taking brief information from the client about what they really want to be displayed on a website.

According to that, web designers arrange the collected information in a creative and innovative way on a website.

In addition to this, Web designers also use coding languages like HTML and CSS (Cascading Style Sheets) to create their designs and some web design tools like Photoshop, Coreldraw, Frontpage, Dreamweaver to make the website stand out from the rivals.

On the whole, Web designers are born with a great sense of aesthetics and they have the ability to make the website look even more beautiful with design and code.

Also read: How to become a Web designer- The best way to start your career

Looking from the above information, if you want to start a career as a web designer, you’ll need a working knowledge of digital design practices and the tools to implement them. Here are a few of the elements we teach at Zuan education in our Web Design course:

Moreover, Web designers work with developers closely, because only teamwork makes perfect results. So it’s necessary for web designers to learn web designing along with coding language and the designers cannot ignore coding to get better cooperation with the web developer.

Once, you developed your skill sets, below are some specific roles for web designers which we’ll highlight below.

As UX designers, you should know exactly how to make a specific audience to enjoy the website through your skills and you must research into building a solid foundation for positive user experience.  With the help of UX designers, businesspersons can encourage your audience to revisit your page by offering the best experience.

As a UI web designer, you must help to improve the way users interact with elements, or the interface, on the website. UI designers mostly focus on the aesthetics (the look and feel) of the actual website. So hiring a UI designer, a businessperson can add value to your website that’s enjoyable and easy to navigate for customers.

The visual designer is a mixture of both UX and UI designer. In essence, they’re a master of all web design trades and your job here is not only to improve the user journey using their creative and coding skills but also to solve any design issues.

4. What does a Web developer do?- a Closer Look:

Web developers give life to art and they are sometimes called programmers. As they take the design created and build a fully functioning website with clean code.

In addition, a qualified web developer should have a certain aesthetic ability and can work well with interaction designers and visual designers. Without a doubt, a good web developer is the one who bridges between web design and code.

On the whole, Web developers convert a static layout into a dynamic website by using images and other interactive elements.

Also Read: How to become a web developer in 3 months?

Bootstrap and so on.

Once, you developed your web development skills. You have job security with Web Development. The Bureau of Labor Statistics predicts, there is 13 percent growth in the employment rate for Web Developers between 2018 to 2028

Like web designers, web developers also have some specific roles for which are highlighted below.

This is also known as client-side development. If you’re an expert Front-End developer, you must know programming languages like HTML, CSS, and JavaScript to create things the user can see, like client lead forms.

The core structure of the website is designed by back-end developers. Here you will use complex software languages like Java, SQL, and C# to create logical, functional websites that cannot be seen by viewers.

It is a mixture of both Front and Back-End developer’s job role. As they are considered as an expert in all areas of web development.

6. How much do web designers and web developers make?

Surprisingly, both jobs pay a significant average salary. Below is the average of estimates from Glassdoor, Indeed, PayScale, and ZipRecruiter for a web designer and web developer in specific job roles.

You can also work as a freelancer from home.

7. Can I become both a Web designer and Web developer?

Yes, you can become both a web developer and a web designer, but you can’t be good at them both. So I suggest, if you are more creative and artistic(right-brained), develop your skills in designing and become a professional web designer.

While you’re more analytical and logical (left-brained), then focus on developing your skills in web development and excel in the field.

I hope, now you’ve understood the common difference between the web designer and web developer. But are you worrying that you don’t have a proper educational qualification to get job opportunities in web design and development?

The international business and financial news channel, CNBC debates that college degrees will be valued less in getting future jobs.

Instead, develop your web designer and web developer skills to get a high paying job with Zuan education!

Please let me know in the comment section, what you have decided to become whether a web designer or web developer?