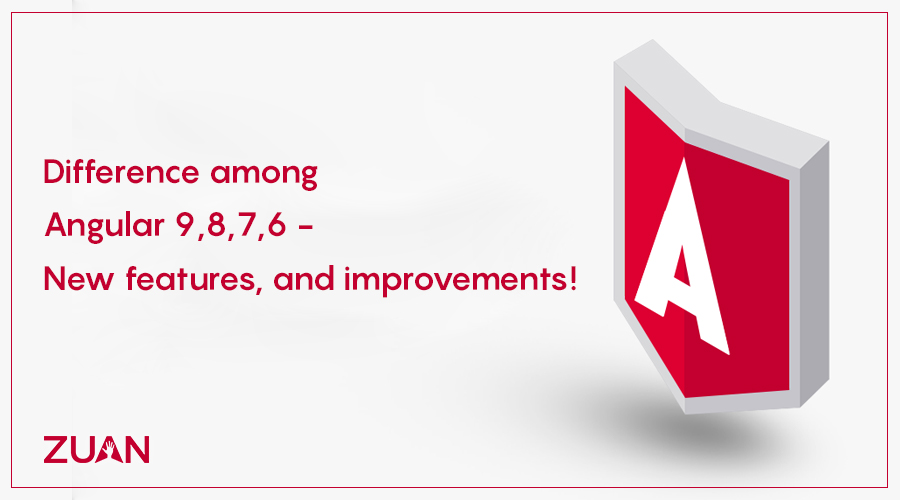 In the modern era, as there is a growing emergence of web applications and mobile applications, every company working in this field looks for an improvement.

In order to achieve that there are certain frameworks globally available like Angular, React, Meteor.

To meet the growing motive and requirements of the customers, there is a need to use updated frameworks, platforms, and technology.

In this blog, we are going to share the differences between the features, changes, and improvements related to Angular 6, Angular 7, Angular 8 and Angular 9.

Angular in general terms refers to a JavaScript framework which is written in TypeScript and developed by Google. It is known as a “Superheroic JS MVW Framework.”

Major changes in Angular 6 are internationalization (i18n) features with runtime rendering and there is no requirement to build one application per locale.

Bazel optimizes your Angular compilation to rebuild the entire application for every change and allows you to archive fast.

ng add allows you to install and download new packages in your angular apps.

ng update helps to update and upgrade your packages. It helps you to upgrade from Angular 5 to Angular 6.

Tree shaking is a build optimization step which helps you to make your app smaller. It uses new injectable services to register a provider directly inside the @Injectable() decorator.

Some Major updates in Angular 6

The scrolling package includes loads and unloads items from the DOM which depends upon visible parts in the list, that gives faster experience to users having huge scrollable lists.

The new @angular/cdk/drag-drop module provides options like free dragging, sorting within a list, transferring items between lists, animations and more.

Some Major updates in Angular 7

Comparing Angular 6 vs Angular 7 vs Angular 8. Finally, Angular 8 was released with ivy rendering which Angular team with updated angular core framework, Angular Material, and the Command Line Interface or CLI.

Ivy is an engine that produces smaller bundle sizes. But it’s not recommended to start using it in production.

Angular 8.0 supports CLI which provides one bundle for every web worker & they do it by writing code off the main thread.

Angular 8 supports dynamic EcmaScript and imports in router configuration by bringing the size of large files and lazily loading the files that are required.

Angular 9 was released on the 7th of Feb 2020, with existing features. The highlight of this version is the default IVY compiler which forms the entire framework’s structure.

IVY as a Default Compiler

The default IVY compiler reduces the bundle size by 25-40 percent for better performance. This enables the developers to decrease the file size and makes it user-friendly. IVY checks the bindings within the templates of any application and then reports if any issues are acquired. This helps to detect any bugs in the development process.

The ng update is the basic update to the CLI framework. This enables us to update any kind of information about migration.

The Phantom variables were not cited in the template’s related components in the previous version.

To build the phantom variables may threaten the applications.

In this version, a compiler error shows up, when a template variable is created.

Finally, we’ve returned to the end of the Angular version comparison.

If you want to learn AngularJS Training Course, feel free to contact us! We can assure that we are best in what we do.

Enroll now and learn from professionals at ZUAN EDUCATION. Hurry up!