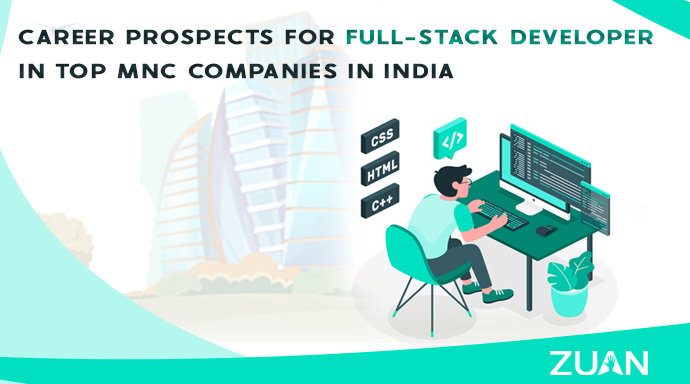 A full-stack developer is a programmer who will handle both front-end and back-end web development.

Because of the versatility of the Full-stack developer, finding a job is easy in top MNC companies because they are what the employers are looking for. Below is the list of the top career options for full-stack developers:

Explore: How to Become a Full Stack Developer

Below are the Top 5 MNC technology Companies in India to Hire Full Stack Developers in 2020 for a high salary.

To know more about the companies which have mentioned in the list you can go through by yourself and then check the website’s pages although I will try to mention the list with accurate details.

Google hires candidates with a broad set of technical skills such as Java, C/C++, C#, Python, JavaScript, and/or Go.

Protip: So, who is ready to take on some of technology’s greatest challenges and make an impact on millions can opt for Google.

Amazon.com, Inc. is an American multinational technology company based in Seattle, with 750,000 employees.

It focuses on e-commerce, cloud computing, digital streaming, and artificial intelligence. Furthermore, it’s been referred to as “one of the most influential economic and cultural forces in the world.”

Amazon hires people with in-depth knowledge of Linux/Unix tools and architecture,  Strong knowledge of the web, security, and networking protocols.

Furthermore, Some experience with security tools such as intrusion detection, log analysis, and network scanning will be an added advantage.

Protip: If you love to be part of a world-class team in a fast-paced environment that has the entrepreneurial feel of a start-up. This is an opportunity for you to grab.

The average annual salary for Full Stack Developer in Amazon is INR 11.4 – 14.7 lakhs in India.

Intel Corporation (commonly known as Intel and stylized as intel) is an American multinational corporation and technology company headquartered in Santa Clara, California, in Silicon Valley.

It is the world’s largest and highest valued semiconductor chip manufacturer based on revenue and is the inventor of the x86 series of microprocessors, the processors found in most personal computers (PCs).

Furthermore, Intel ranked No. 46 in the 2018 Fortune 500 list of the largest United States corporations by total revenue.

Furthermore, people with some experience in RDBMS systems, and creating a web UI framework using angular and Vue JS or any other javascript UI framework will be an added advantage.

Protip: So, if you love a challenging workplace where teams are diverse, competitive, and continually searching for tomorrow’s technology and the brilliant minds to create it, then Intel is ideal for you!

The average salary for a Full Stack Developer in Intel is ₹ 6,38,150 per year in India.

Its best-known software products are the Microsoft Windows line of operating systems, the Microsoft Office suite, and the Internet Explorer and Edge web browsers.

Furthermore, Microsoft is ranked No. 30 in the 2018 Fortune 500 rankings of the largest United States corporations by total revenue.

If you want to get hired by Microsoft, you must have broad skillset with Angular 2.0 and above, Node Js, Websockets, Java, Java 8, Spring, Hibernate, Spring boot, Oracle/SQL, REST, API development, JSON, XML, GIT

Protip: If you think you are India’s most talented individual with full-stack developer skills and also strive to create a better future, then Microsoft is waiting to welcome you.

At Microsoft, the average Full Stack Developer salary in India is ₹703,235 per annum

Apple hires candidates with a broad set of technical skills such as Python development, JavaScript, web-standards, and modern frameworks, Expertise in AWS, React or AngularJS.

Furthermore, having experience in designing, building, and maintaining RESTful APIs will be an added advantage.

Protip: If you’re passionate about the user experience, want to be part of a group that works on very early stage products from concepts to deployment, apple is the team for you!

The average salary of a Full-stack developer at Apple is Rs. 9.24 LPA per annum.

With increasing options of platforms – Desktop, Web, Mobile, AR/VR, etc., the scope for software development is only going to increase.

According to the World Economic Forum, software developers are the fourth largest in demand as emerging job roles. This clearly shows the evergreen nature of software development jobs.

If you think, the above-mentioned skills limit you to get hired by those top MNC companies in India.

You can learn full-stack development from Zuan Education and it will be the best place for you to learn basic to advanced level.

Explore: What Are The Skills Required To Become A Successful Full-Stack Developer?

Here, you will learn in-demand full stack developer skills from an expert trainer and grow your knowledge with live project sessions.

So in a nutshell, the full stack developer is by no means accomplished overnight. What you need to do is laying the technical foundation, strengthen the core skills, and keep learning for more challenges.

I hope you have found this article useful. Do share your thoughts below in the comments section now!

What Artificial Intelligence Skills Will Get You a Job in 2020!

Top 5 New Technology Trends in 2020 and the Jobs that Will Create for Millennials!

Collection of Top 25 Blockchain Interview Questions and Answers that Most Often Asked by Top Employers in 2020!

8 Must-Know Website Design and Development Practices for Freshers Before starting any Projects!

The Growing E-Commerce Career Opportunities for Students after Lockdown!