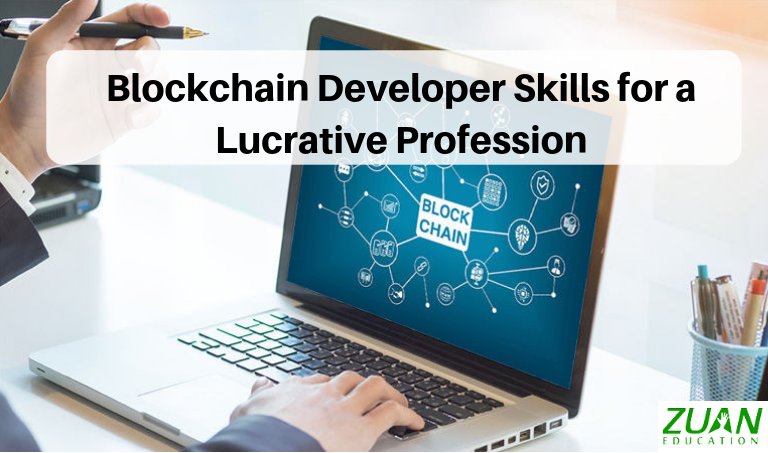 First make clear, that blockchain is not only about bitcoins. So there is nothing wrong in learning blockchain development skills.

I know, as you do, that bitcoins are banned in India. So that doesn’t mean that you should not learn blockchain technology.

Where will I get jobs as a blockchain developer?

Industries that Use Blockchain and Your Opportunities To Get Hired

Apart from the world of crytocurrencies, astoundingly you get opportunities for blockchain related jobs in the following fields,

Now that you have umpteen number of fields where you will get jobs in blockchain:

What should I do to get a job? Of course, you need to learn few blockchain developer skills.

The skills that are listed below need not seem mammoth for you. Of course, it may appear so in the beginning. But once you get a grip of the stuff you will simply cruise through it.

Who is a Blockchain Developer?

As a developer, if you are involved in the development of blockchain technology, you’re tagged as a blockchain developer.

However, there are two types of blockchain developers namely,

This categorization is based on different types of blockchain works or job roles.

Blockchain Developer Skills Needed to Get you a Lucrative Job

As a blockchain developer, you’ll help to build a fully decentralized internet. You have to basically decide on which blockchain you want to develop on.

Two of the most popular blockchain platforms are NEO and Ethereum.

Ethereum was created by Vitalik Buterin and went live in 2015.

Similarly, NEO was originally called Antshares. It was founded by Da Hongfei and Erik Zhang in 2014. It became NEO in 2017.

Furthermore, the first dApp was built on bitcoin’s blockchain which is a peer-to-peer payment system.

Significantly, NEO is focused on providing platforms for digital businesses of the future. Moreover, NEO follows Chinese business regulations and works closely with the Chinese government.

Likewise, Ethereum has links with big businesses like Mastercard and Samsung.

Significantly, Ethereum has its own language called Solidity. However, Solidity is similar to other programming languages like C++ and JavaScript.

Importantly, Solidity was developed by an Ethereum team led by Dr Gavin Wood in 2014.

Significantly, Solidity is a high level coding language. Meaning it is designed to be read and used by human beings.

Learning Solidity is similar to learning to speak a new language. Some of the tools used to create Solidity smart contracts are,

Apart from NEO, Ethereum and Solidity other technical skills required of you as developer are,

You should be thorough with concepts like cryptographic hash functions, consensus, and distributed ledger technology.

As a blockchain developer you will be constantly playing around existing data structures like merkle trees, petrecia trees, etc to meet your personal network requirements.

Importantly, blockchain uses a plethora of data structures along with advanced crytography to build a secure and immutable system.

Several cryptographic methods like hash are used in blockchain apart from asynchronous cryptography. This is used for generating digital signatures.

Therefore, basic knowledge of both front-end and back-end development is a necessary skill. You should be able to create interactive graphical user interfaces for Dapps, API handling, request handling, etc.

You should know how to code smart contracts and create DApps in Hyperledger Fabric. This is a blockchain framework implementation. And of the Hyperledger projects hosted by The Linux Foundation.

You should have a knowledge of sidechains and off-chain transactions. As well as blockchain and wallet security, cold wallets and smart contract security.

The next important thing that you should learn and have a knowledge in blockchain developer skills are the programming languages.

4 programming languages you would need as a blockchain developer are,

C++ creates applications that not only coordinates between numerous endpoints but also process their interactions quickly.

Therefore, blockchain projects like Bitcoin, Ethereum, and Ripple are all written in C++.

Java is useful in making simple and immutable blockchains. Furthermore, immutability makes it impossible for anyone to change the contents in a block after it has been “hashed”.

Simplicity is a blockchain programming language designed for smart contracts.

Other Related Blockchain Developer Skills in a Capsule

It will be good if you have the following related skills as a blockchain developer.

As I told you all the stuff mentioned above would seem a mammoth task. But it really is not so. Proper training in Blockchain can help you to be of great help in various promising industrial implementations.

In the world of internet space and virtual machines, blockchain developer skills will help you to get a secured job future.