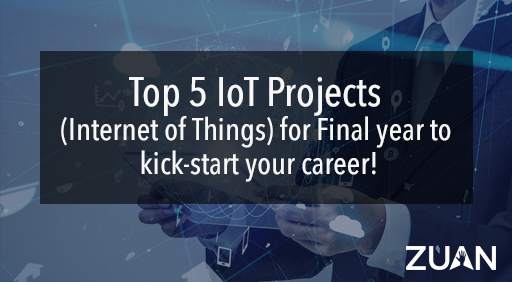 Are you a  final year Engineering student and looking forward to some challenging and real-time IoT projects?  Then you have landed in the right place to gain mastery in the field of internet of things. In this article, we will discuss the best IoT projects that will boost your knowledge, skills and your IOT career too!!

The Internet of Things (IoT) is a new leading IT technology for this advanced world. Why not? This technology can even change the lifestyle of people.

But before diving deeper into IoT project ideas, this is the common question that arises for many newcomers: what is the Internet of Things is?

To put in short, IoT can be defined as a network of physical objects that are connected through the internet. Physical objects are anything that contains embedded electronics, sensors, software, etc. with the internet. Most often, using the IP addresses, those smart objects can exchange data among the network and can make a decision.

The following real-world IoT projects will offer you a promising way to gain hands-on experience and start your journey with your dream IoT job. Now let’s quickly jump to our best IoT project ideas (Internet Of Things).

Below are the top IoT project ideas for final year students to master the technology:

The Internet of things (IoT) concept works with almost every machine and it is one of the upcoming technologies that allows us to control hardware devices through the internet.

But when it comes to home appliances, IoT does a smart, automated system. With the help of IoT based automation systems, users can control and monitor the home stuff anywhere from the world.

Once receiving user commands over the internet, the microcontroller processes the instructions of the user to operate these loads accordingly and display the system status on an LCD display. Thus this system allows for efficient home automation over the internet.

With more and more devices getting connected to the internet, the demand for IoT skills is increasing exponentially.

Before using a smart weather monitoring and reporting system, we generally update the report of the weather manually which is very time-consuming. Hence, to reduce time consumption, an automated reporting update solution arises.

This IoT based weather reporting system brings a solution where this system uses temperature, humidity, rain sensors to monitor the weather and provide live reporting of the weather statistics

The weather reporting system using IoT constantly transfers the data to the microcontroller, which now processes the data and keeps on transmitting it to the online web server over a wifi connection.

This data is then live updated to be viewed on the online server system. Additionally, the system allows the users to set alerts for particular instances, the system provides alerts to the user if the weather parameters cross those values.

However, health is the most valuable treasure of every human life, but today in the daily routine works, people are hardly going for a health checkup.

In such a case, IoT projects like health monitoring systems can make a solution here with the devices that monitor our health regularly and send the monitored data to the doctor.

Based on that data collected, doctors can check the current situation of the patient at any time and anywhere from the world. It is also notable that sensors in the body of the patient can determine sugar level, blood pressure, and heartbeat and instantly alarm the doctor if it is higher than the normal level.

The sensors are connected to a microcontroller to track the status which is in turn interfaced with an LCD display as well as wifi connection in order to transmit alerts.

If the system detects any sudden changes in patient heartbeat or body temperature, the system automatically alerts the user about the patient’s status over IoT and also demonstrates details of the heartbeat and temperature of patients live over the internet.

In our everyday life, we produce a large amount of garbage. But with an IoT based system project, we can smartly handle garbage collection. Here, the garbage monitoring system will help to clean the city more innovatively.

This IoT based garbage monitoring system uses an ultrasonic sensor, AVR family microcontroller, LCD screen, Wifi modem, and a buzzer. The system is powered by a 12V transformer.

Thus this Garbage based IoT system helps in keeping the city clean by informing about the garbage levels of the bins by providing a graphical image of the bins via the IoT Gecko web development platform.

Today, Agriculture plays a vital role in a country’s economy, but it is difficult for the farmer to always monitor the moisture level and water supply of the whole field.

Moreover, users will be able to check the moisture level, and with the predefined threshold for a moisture level of soil, the power supply will be cut-off.

Here the IoT based smart irrigation system is connected to the internet using a Wi-Fi module. Here we use an Arduino Uno board to transmit the control signals and to connect to our desired website.

On the connected website, two things will be displayed:

a) Motor status b) Moisture level

The circuit keeps on checking the moisture content of the soil with the help of a moisture sensor and updates the “Moisture level” on the website.

The user can then check the present moisture level from a remote location and control the water supply from anywhere. For this, the user just allowed to toggle the “Motor status” from ‘ON-OFF’ or ‘OFF-ON’; and the “water pump” will be ‘turned ON’ or ‘turned OFF’ accordingly.

Thus the ‘soil-moisture’ gets monitored and the ‘water supply’ can be controlled just by toggling the “Motor status”.

Hence, this project is to keep a track of ‘soil-moisture’ and to make sure of proper water supply even from a distance.

With this, we have discussed some real-time IoT projects for final year resume building, now, let us learn about the programming languages that are essential for completing IoT projects.

Did you know? Currently, there are more than 250 programming languages in the world, but we are supposed to choose the right tools based on our project requirements. Some of the most popular programming languages (and tools/frameworks) that are commonly used in almost every IoT projects are – C, Java, Python, Javascript, Swift, Php, C#, Go, R, Ruby, Rust.

Here is the list of programming languages used in the IoT project that you must refer to before moving forward.

Moving ahead in the IoT projects article, now, it’s time to explore the steps to become an IoT developer.

Below are the 5 tips from IoT experts on how to break into a career developing connected devices.

1. Gain a deep understanding of sensors– This is important among the top skills required for IoT developers.

You must showcase your skills in knowledge of wireless communication systems and embedded logic.

3. knowledge of AI and Machine Learning as Skills Required for IoT Developer: As an IoT developer, you must have the skills of analyzing and gathering a large amount of data. This will be useful for deciphering the pattern and estimating the outcome.

Because of several complexities, Artificial intelligence is used for handling the difficult tasks and autonomous decisions are made with the means of AI.

4. Play with a Raspberry Pi: Raspberry Pis are very inexpensive, tiny computers, and are frequently used in the proof of concept IoT projects

5. Cloud computing skill: Due to the interconnected network of things of IoT, there is a huge amount of data to handle. The best way to address this concern is to resort to cloud platform solutions that can help host excess data.

Related: What Are the Skills Required to Become an IoT Developer?

Now, let’s check out the benefits of working on these above IoT Projects for final year students.

Benefits of Working on IoT Projects

I hope you now have an idea of doing your final year project with the help of my best 5 IoT projects for final year students article which is even helpful for advanced learners.

Now, the ball is in your court, start working on these projects in order to gain mastery in IoT and get placed in your dream job!!

Don’t worry, Zuan Education offers IoT Training in Chennai which helps you to learn the important IoT programming languages right now to make a good choice in a career change.