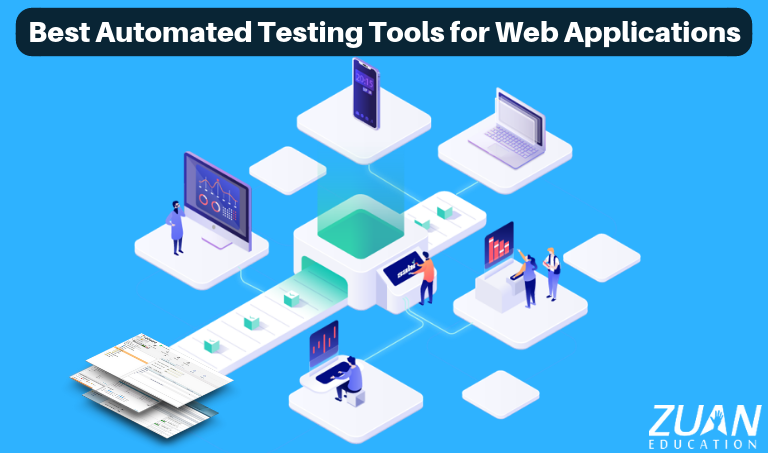 Why do we need the best Automated Testing Tools for Web Applications?

Time, speed, quantity, and quality make automated testing a preferred choice for large projects. This demand for producing higher-end software requires businesses to seek solace in reliable and efficient software testing tools. However, there are so many tools out there.

So the question is how to pick the right one. I have come with some of the most popular and deemed to be the testing tools for web applications. That is to say, I am not here to recommend or endorse any product in particular. I am only trying to place some of the popular ones on a single page so that you can have a better clarity over them.

The answer to the earlier question lies within you. You should pick the ones that you think caters to your needs in the best possible way.

Selenium is the most popular and widely used open-source web automation framework. Based on a Survey on Test Automation Challenges, nine out of ten testers used Selenium in their projects. That is to say, this testing platform is also considered as the industry standard for UI automation testing of Web applications.

Selenium can extend its web services across multiple Operating Systems like Windows, Mac, and Linux. Also to various browsers like Firefox and Chrome.

Additionally, it works well with several programming and scripting languages like Java, C#, and Python.

You must know that Selenium offers flexibility like no other web application testing tool. Well, that is, if you are someone who has experience and skills in programming and writing scripts. You can build the best kind of automation framework necessary to automate the web. Provided you have advanced programming skills and some quality time in your hands.

There is indeed a reason why Selenium is considered as one of the testing tools for web applications. Moreover, this acts as a concrete reason why today many graduates and professionals are opting for Selenium Training to reign in the testing industry.

is one of the best automated testing tools for web applications, desktop, and mobile.

You can use any of the several programming languages like Python, JavaScript, and VBScript to write the test scripts.

You can build and run functional user interface tests seamlessly. The tool’s features also include the record-and-playback feature and the object identification engine.

Apache JMeter is a popular open source and the testing tools for web applications. According to the Test Automation Challenges survey, around 25% of respondents favored JMeter. Hence, making it the third most popular tool for test automation of web apps.

This cross-browser testing tool supports various kinds of applications, protocols, and servers. It can load tests even on a simpler infrastructure. This automation testing tool also supports several load injectors managed by a single controller.

JMeter also hosts a powerful Test IDE, easy-to-handle UI, dynamic reporting, and command line mode. In addition to it, it is also known for its portability and multi-threading. Its record-playback option and that highly extensible core are es.

It supports CSV files for API testing and as well the integration with CI tools.

If you are on a Java-based web app, then JMeter could be the one you were looking for. It is highly portable and supports almost every single Java-based app on earth.

Studio is an automation tool for testing API, Web, and mobile apps. It works magic across several platforms such as Windows, Mac OS, and Linux.

Our little champion can give a run for our money. It can record actions, create test cases and scripts, generate test runs, report results, while working alongside many other tools. It is capable of generating resilient and maintainable locators. Test scripts run even when the app under test is modified.

studio has a lot of facilities that can improve the skills of Selenium and Appium. It hosts a number of built-in keywords which can be used for test cases. Studio can record and playback, and as well as object spy. Moreover, it also includes features like cross-browser execution, JIRA integration, Keyword-Driven Testing, Data-Driven Testing, and Web Service Testing.

And above all, it is easy to use; doesn’t require a techie to work on it. And, now to the best part: it is available for free of cost!

is definitely one of the testing tools for web applications available in the market. And now you know why!

UFT, also known as HP QuickTest Professional, is yet another leading cross-platform automation testing tool. It can automate a number of applications like Delphi, Net, PeopleSoft, and Visual Basic. Moreover, it works well on both web and mobile apps.

Cypress is one of the best open-source automated testing tools available in the market. It can handle modern JavaScript frameworks like no other tool.

It records tests run in a perpetual synthesis. As a result, the developer can understand failures and optimise test runs. He/she can even share results with their team effortlessly.

You could say that Cypress was created keeping the modern web in mind. As a result, it can work on any front-end platform or website. Since it runs the test in the same run-loop as the application, Cypress provides quicker, better, and more substantial testing for anything that runs in a browser.

, pronounced as “water”, is an abbreviation for “Web Application Testing in Ruby”. It is a Cross-browser testing. This open-source automating tool works on various web browsers like Internet Explorer, Firefox, Chrome, Opera, and Safari.

On the other hand, Watir also supports applications written in languages other than Ruby. That is, it can run tests on any language-based web application.

Watir belongs to the family of Ruby libraries which can support multiple programming paradigms, including functional, object-oriented, and imperative.

Another feature of Cypress is that it is compatible with business-driven development tools like RSpec and Cucumber.

This list of the best automated tools for web application covers about Seven tools that are still in the market. Well, to be honest, the number of Automation Testing Tools that are available in the market is nowhere close to the number in our list. The real number can be overwhelming. However, these 7 are some of the most popular ones aiming at different types of testing.

Some of these automated software testing tools are open-source. And some licensed. As mentioned earlier, you should go with the tool that meets your needs and requirements. Know what the priorities are.

However, you should remember that your choice should not only cater to the needs of the present. It should also focus on the future. Think of the possible developments, enhancements, or alterations.

If you think that you might be interested in making a career out of software testing, go ahead and signup for a course. You may even take a look at our software testing course to learn more about the feasibility and the kind of curriculum you get from a decent institution. There are also quite a few reputed websites that offer courses online.

I hope that this list of 7 Best Automated Testing Tools for Web Applications will give you an idea as to what to expect from the tools. In the process of curation, there were few other tools like , TestingWhiz, and Soap UI that had almost made it to the list. I think I wouldn’t be doing justice if I don’t mention them here.

So, remember something before you make your final decision: a good tool should at the least support basic optimization, automate test cases, generate data, produce intelligent solutions, and develop analytics.

If you believe that I had overlooked any tool, you are welcome to draw out your observations, suggestions, insights, and experiences in the comment section below!