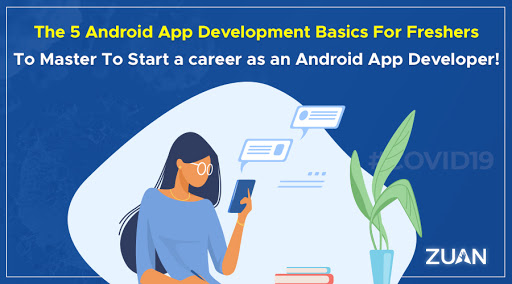 Today in the digital world, there are over five billion mobile users, with global internet penetration standing at 57%. In which, 2.6 million people use Android apps, whereas 2.2 million users use iOS apps.

Android is an operating system which is built basically for Mobile phones. The android apps (games, music player, camera) are developed on an application known as Android Studio. These executable apps are installed through a bundle or package called APK(Android Package Kit).

Hence, Android apps make mobile phones “smart” and through their extraordinary benefits, apps have drastically transformed how we function today.

So, without further delay, Let’s get started,

In Android, basically, to develop any android app, you must know Java or C++ and XML(Extension Markup Language) – the two main programming languages used in Android App development.

However, today KOTLIN is also preferred.

The XML file is used to design, presentation, layouts, blueprint, etc (as a front-end) whereas the JAVA or KOTLIN language is used for working of buttons, variables, storing, etc (as a back-end).

In the android app development basics for freshers, it is important to start learning the right build automation tools and the integrated development environment before you start developing your android app.

When it comes to familiarizing yourself with the right development tools- The most common IDE is Android app studio IDE or the Eclipse, they will help you learn the basics and many other things that will help boost your code.

On the flip side, you can also learn Apache Maven, Apache Ant, and Gradle as they provide a compelling set of tools to help in managing your builds.

It is also essential that you must have knowledge of source control tools and concepts.

For this, you should learn the git and then create a git-source repository (by signing up an account on Bitbucket or GitHub).

On the other hand, you can also use the Git Pocket Guide to learn the basic concepts and terms of how the platform works.

3. Get Familiarize Yourself with the Android Application Components:

The Android Application components are the essential building blocks of Android app development.

Furthermore, each one of these components exists as its own entity and plays a particular role i.e from launching an app till the end.

Some of these components depend on each other, and not all of them are actual entry points.

There are five major android app components each following a different purpose with a distinct life cycle which describes how it is created and destroyed. They include activities, services, content providers, broadcast receivers, and activating components.

Thus, Activities work together to form a cohesive user experience in the app. However, each one of them does not depend on each other and each plays a specific role.

Services: This is a component that operates in the background to do work for remote processes or long-running operations. It does not provide a user interface (for example: let’s take podcasts that play in the background while the user is in a different app like Facebook or any other messaging apps).

Content providers: This is the component that holds a shared set of app data. Through this component, the data that you save either in the file system, on the web, an SQLite database can be questioned or even modified (as long as the content provider allows it). This component is also useful for reading and writing data that is not shared and is private to your app.

Broadcast receivers: This is the component that responds to the messages from other applications or from the System. Most of the broadcast receivers start from the system, and although they do not represent a user interface, they can just create a status bar notification alerting the user when a broadcast event occurs. Typically, it is a gateway to the other components and it only does minimum work.

Activating components: A contemporary message referred to as intent stimulates 3 of the 4 components (i.e. services, activities, and broadcast receivers). Intents also connect individual components to one another at runtime whether the component belongs to your app or not.

4. Get Knowledge over Fragmentations, Android Application, Threads, Loaders, and Tasks:

Android is a fragmented market with various different devices and operating system versions.

Note that, if your mobile device supports more devices and/or versions. No doubt, it will certainly require more maintenance and testing as well as the related costs or vice-versa.

At the same time, you also require relevant fonts, assets, and layouts that will assist in ensuring that the best possible experiences in the different screen characteristics are given.

You should also consider the array of android supported sensors or UI facilities. All android mobile apps have a class, one or more activities, and one or more fragments.

Sometimes, you may have services for background tasks that should run continuously but other times you may not.

If you want to produce a great and smooth user interface, always ensure that the thread is never blocked.

Therefore, the long operations (computations, I/O, network, etc.) should all be run at the same time in the background (mainly on a different thread of execution). This is why it is necessary to learn the Java language concurrency facilities.

5. Make the Right Choice when it comes to Needed Tools:

There are so many simple free tools available in the market for android app development- Those are Mac or Windows PC, any type of Linux, and Eclipse, the ADT Plugin, and the Android SDK.

On the other hand, you can also go through the installation guide that is available on Google to learn how to set up your development environment; as it provides documentation of everything you need.

Android app has some unique parameters which you must consider before you write code for the Android app.

Some of them are:

Performance and responsiveness: You must ensure that your developed android app must respond to user input within five seconds otherwise the operating system will ANR you. (ANR-application not responding – the only choice that you will have is to force close your app.)

Lags of more than 100ms will be noticed by the users: As stated above, the UI thread should never be blocked because it is only one.

Limited resources: Wake-locks (the mechanism that forces the device to do a particular thing despite the recommendation to put the device to sleep by the battery manager) should be used sparingly. Do not carelessly poll hardware (e.g. GPS or accelerometer) because it will immediately run down the battery.

I hope this android app development basics for freshers article is useful for you to develop a robust android app. Today, there are almost 500 million smartphone users in India, in which the majority of 77 percent of Indians spend their time mostly in mobile apps.

Therefore, ensuring that a career as an Android App Developer is a stable one with lots of opportunity for growth.

There’s a lot to learn, so consider getting started with the Zuan Education Android Mobile application development training course to master the Android fundamentals.

Further, our Android app development course is designed for students and professionals who wish to enhance their skills in Android development.

We offer hands-on training and in-depth approach to Android app development using Java and Android Studio. We ensure that our android training course will empower you with the knowledge of visualizing, building, programming, and publishing an Android app.